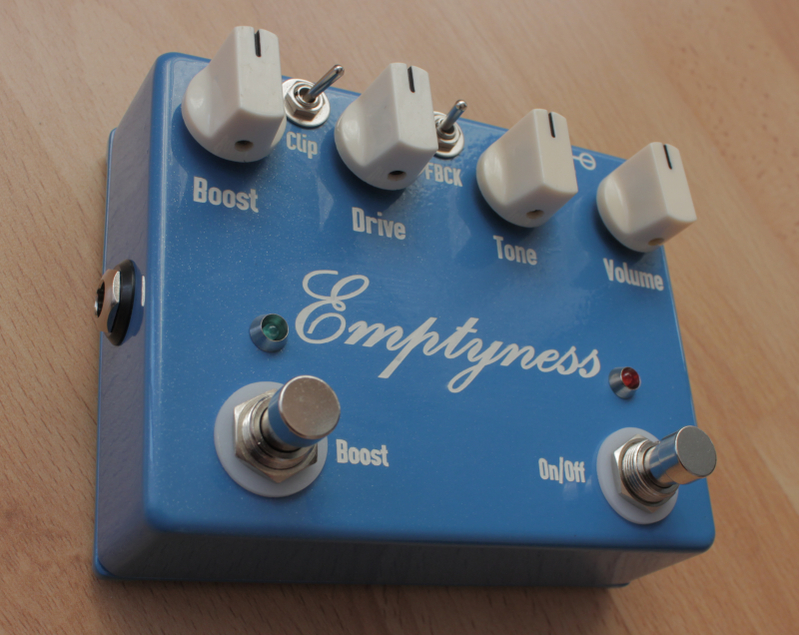 As I already stated earlier: I love double pedals. I simply love when everything is in one package for the basic sound. Therefore I always was interested in the Fulltone Fulldrive series. The Fulldrive 2 Mosfet is a nice OD, that reaches the crunchier, growling territory with the boost option. The switchable clipping and feedback options are the topping on the cake. Nothing very special about the sound, but with the many options it is a very versatile one. Many people say Fulltone does not have any original ideas, they “steal” their designs. Well, in electronics the term “stealing” does not necessarily have much sense and on the other hand I have not seen this pedal with these features from any other companies, so at least putting these options in one box was Fulltone’s original idea.

Looking at the schematics it is clear what it is all about: a bit “re-tuned” Tube Screamer with lots of additional options. The signal travels through the input buffer to the first opamp stage which is responsible for the main boosting of the signal and the clipping. The second opamp stage is an active tone control taken directly from the TS. The signal then goes through the output buffer to the output. Indeed a basic TS design with an option to switch between Si or Mosfet clipping. The first opamp stage’s frequency response is a bit “re-tuned”: the original TS had the lowpass filter at 720Hz (so anything below it would be amplified and clipped less and less) while the Fulldrive has this point at about 340Hz. Also the Fulltone’s Drive pot can be switched between the original 500k value and a “boosted” 1M + 500k value. The latter gives you triple amplification and therefore more aggressive clipping as well. And there is the switchable feedback between the two stages. The real versatility is provided by the two switches in the original: MS and FCV. MS simply changes between the Si and Mosfet clipping. FCV is a bit more complicated:

– At one side of the switch we get clipping (as set with the MS switch), but no feedback
– In the middle we have feedback and clipping
– At the other side weget feedback, but no clipping

I guess the engineers at Fulltone had quite some thought to incorporate these settings and to give them the fancy names “CompCut”, “Vintage” and “FlatMids”. For this though in DIY you need a somewhat special ON/ON/ON three position switch and one of the possible combinations is not available. I like to separate the clipping options and the feedback switch completely, which is more logical for me, has the fourth combination (no clipping and no feedback either) available and requires cheaper/readily available components. The schematic shows the original switching options, but I have also added some notes on the alternative switching options.

The effect fits nicely into a standard 1590BB box, the build docu can be found in the Projects menu.