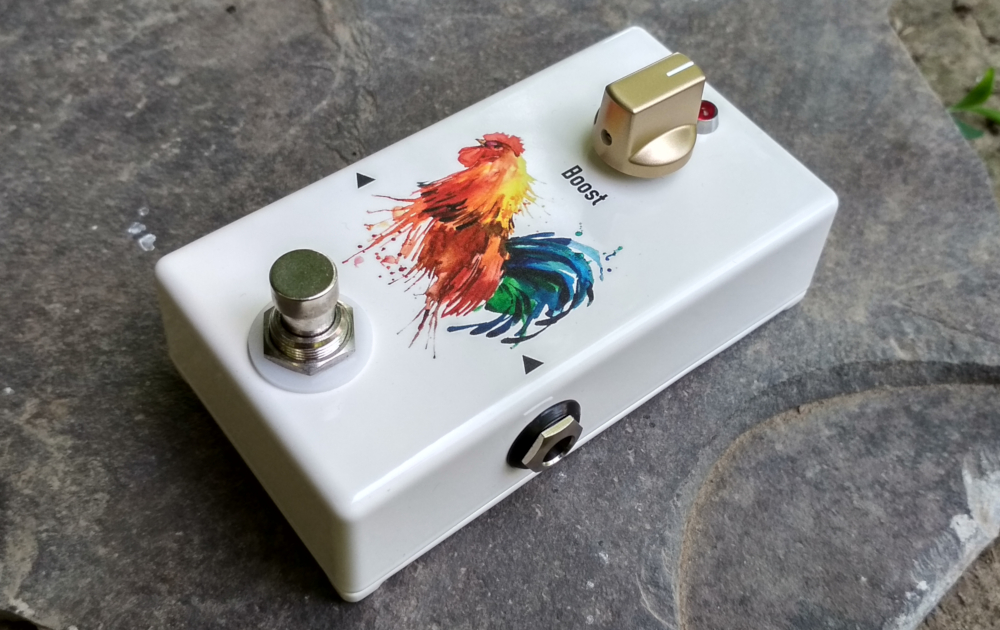 Yes, yes, I know, there was already a Rooster Booster post… The thing is that even though I like the AMZ Mini Booster a lot, I don’t use it anymore on my board. It was great to get more gain from other drive pedals, but I have a solution already for that in my system. On the other hand I needed a pedal that – like a magic wand – could make me heard, to pop out of the mix with a push of a button. I found it where I would have not looked on my own: the Tube Screamer. Honestly I hate the sound of the Tube Screamer as an overdrive. But many use it as a boost with the Drive pot turned all the way down and the Level pot turned up as much as needed. I tried it and it worked like a charm, and so I built my Soylent Green pedal. I used it happily in my pedal chain almost at the front (only my wah and my envelope filter were before it) and it did its job just fine. But in the mean time there was this beautiful box of the Rooster Booster laying around, unused. I tried many booster designs in it, but then I always gravitated back to the TS. And then suddenly the idea struck me: why not building the TS stripped down with only one Level pot. But then – I went on thinking – it should not only be a simple stripped down version, it has to be an own design! That’s how the Rooster Booster Reloaded came to existence. 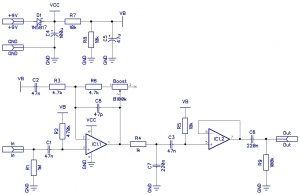 The basic idea was simple: I don’t need distortion, so I can leave off the clipping diodes. I left off the input and output buffers as well, just like in the AMZ Son Of Screamer. First I thought the tone section was unnecessary too, but after the first trials I had to realize that the tone circuit has a lot to do with the distinct “Tube Screamer sound”. I liked the the original with the Tone pot around the middle position, the C3/R5 high-pass filter simulates that more or less. I chose C3 to be 47nF, but I have long hesitated if I should lower its value even more. I tried 33nF, and for my taste it was already too much like a treble booster. 39nF might be worth to try instead. Or any other value, you could even put it to an external switch – feel free to experiment. I wanted as much headroom as possible, so for a while I was playing with the idea of a bipolar +/-9V power supply. At the end the ca. 20x clean voltage amplification (~26dB) possible with the simple +9V power supply was more than enough for my purpose, but if you need even more, then you can power yours with +18V and swap the 100k Boost pot to 200k, thus doubling the amplification ratio. I have used the good old 4558 opamp, but just like in the Tube screamer (or in any other opamp driven effect) you can experiment with this too.

You can find the documentation under the Projects menu.