I have certainly said it and will most definitely do so in the future too: one can’t have enough fuzzes. Funny that I could find my other dirtboxes quite easily and they are more or less constant on my board, but I find every six months a new favorite fuzz. This time it is the SRS EQ Exciter. The original has only a Volume and an EQ pot, I have added a Gain pot too. This addition is not absolutely necessary. I like to turn back the fuzz a bit, but the original with the constantly cranked fuzz sounds just as good. It cracks, crisps and grunts and even despite the high amount of bass it has, the sound seems to be quite balanced. You can refine this further with the help of the EQ pot. It sits quite well in the mix even though it is a fuzz, but I like to use it more for solos. It is a Fuzz Face relative, so it doesn’t like to be after a buffer, I would suggest putting it at the front of your effect chain. I would advice to try it for those who are still looking for a good fuzz and most definitely for fuzz-maniacs. Might work well with bass too. 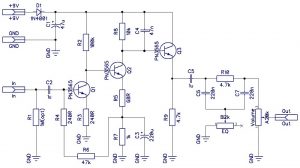 From the schematic the relationship to Fuzz Face is clear. In essence it is a Si Fuzz Face with an added buffer at the end and a simple tone circuit before the volume control. The original has no Gain control whatsoever, by changing the R6 resistor to an A50k pot wired as a variable resistor you can achieve this too. In the build documentation both versions can be found. The original calls for PN3565 transistors, I have used 2N2222’s that have somewhat higher gain. With these I have a bit more crunch and more modern sound. If your goal is a more vintage feel, I’d suggest going with the original specs and using PN3565’s. Or experiment with any transistors, just take care of the pinout differences. The build documentation can be found under the Projects menu.