Buffer or no buffer?

Buffer or no buffer?

Today we have a bit deeper tech talk, if you are not interested in that bla-bla, then just jump to the conclusion ;)

True bypass or not? This is the question! The true bypass vs. buffered bypass is a very sensitive topic among guitarists. For a long time (and even today) true bypass was considered the holy grail in the boutique pedal world. But is that really so good? Let’s have a look. A person not minor than Peter Cornish has some arguments for buffering. His arguments are: the parasitic capacitance of the cables and pedals build a lowpass filter combined with the impedance of the guitar pickup. The higher this parasitic capacitance is (e.g.: longer cables with worse quality, more effects in the chain) and the higher is the impedance of the guitar pickup the more highs we lose because of the mentioned lowpass filter. On the other hand many users and builders argue for the true bypass effects stating that buffers are additional elements in the signal path and therefore they certainly affect the tone. But what is the truth?

I measured my rig based on the writing of Peter Cornish. My chain consist of a 4m cable (measured 0.5nF), a 2.25m cable (measured 0.35nF) and a board of 7 true bypass pedals (in total 0.35nF). So the average parasitic capacitance of my cables is 0.14nF/m and for the pedals we can calculate an average of 0.05nF/piece. In total my rig has 1.2nF parasitic capacitance. My pickups are not too strong, their impedance is about 9kOhm. Calculating with this the cut-off frequency is 14736Hz (there are many pages on the net offering lowpass filter calculators, for example this one). This is not that bad at all, especially if you take into account that I can’t hear over 16kHz at all (well, the years of loud rock music have their toll…), but most people can’t hear over 20kHz anyway. Also this does not mean that over this cut-off frequency everything is muted, but there is a 20dB/decade attenuation over this frequency. On this same equipment an average 5.6kOhm single coil pickup would have the cut-off point at 23683Hz, so there would be no attenuation at all in the audible range. If I would use a higher output and also higher impedance passive pickup with an impedance of 16kOhm, then the cut-off frequency would be at 8289Hz, there I might hear some loss of highs. In the example of Peter Cornish, he has one 4.5m cable, one 9m cable and 10 pedals, so counting with my average values the total parasitic capacitance would be (4.5m*0.15nF/m)+(9m*0.15nF/m)+(10*0.05nF)=2.525nF. Calculating with this the situation is already worse: the 5.6kOhm vintage strato pickup would still be ok at 11255Hz, but with my 9kOhm pickup it would cut-off at 7003Hz, while the 16kOhm high output/high impedance pickup would cut-off at 3939Hz. With this rig we would already experience quite some loss in highs.

Fine, we calculated this, but what can we do? Well, we can see that the majority of the parasitic capacitance comes from the cables. The 0.05nF/pedal that I measured above is most probably also coming from the patch cables. So we can use low capacitance cables. On the net one can find quite some tables comparing the capacitance values of different cable types. The average lies in the 0.1-0.15nF/m (100-150pF/m) range, just as I measrued too, but there are high quality cables in the 0.01-0.03nF/m (10-30pF/m) range too. Sure, one could use such cables, but… But who the hell would want to pay 40-150 USD for a meter of a cable? Surely not me…

Especially since there is another option too: using a buffer. Yes, my dear true bypass maniac friends, you heard it correctly: buffer is good, ‘mkay? Of course only used wisely, not every pedal needs to be buffered. One buffer is enough at the beginning of our pedalboard and maybe one at the end if you have a very long cable running to your amp. Optimally the buffer can be built into the guitar too, but then a power source needs to be in the guitar too. Guitars with active electronics already have this builitn, as this is part of the onboard preamp.

And why exactly is a buffer good for us? A buffer is in essence an amp that has a gain of one. It is good, because it “isolates” the input from the output galvanically. Of course the output still depends on the input, but they are not connected galvanically anymore. This is good, because the input (in this case our guitar’s pickup) will not see the “world” after the buffer. Another important quality of a good buffer is its input and output impedance: the input impedance is large, so it does not add much to the source’s impedance with which it is in paralel and the output impedance is low and so it has a higher cut-off frequency with the parasitic capacitance after it. In general a good buffer has an input impedance at about 1MOhm or higher and an output impedance of 1kOhm or lower. There is an extensive list of basic buffers on Jack Orman’s page <http://www.muzique.com/lab/buffers.htm> together with each type’s pros and cons. From the technical implementations I would like to show here two widely known and used buffer types. The Klon buffer was used in the famous Centaur Klon pedal, while the Cornish buffer is a design of Peter Cornish, he uses it in his effects, for example in the famous G-2 pedal. 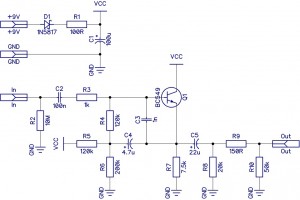 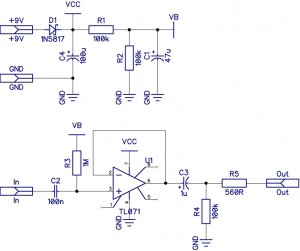 And now some thoughts for conlcusion…
Before getting too much involved in the depths of buffers and low impedance cables it is worth to stop for a moment and think about some things. A few decades or even a few years ago a guitar cable was considered good if it wasn’t broken, a pedal was considered good if it made your guitar growl. Jimi Hendrix didn’t measure the impedance of his cables and did not regret his wah to be buffered. Yet his sound is still considered as standard for many guitarists even today. On the other hand with the techniques described above your sound will not necessarily be better, it will just contain more highs. If it is good or desired for you or not is your own choice. It is however worth to consider that the frequency range of a guitar in the standard E tuning is between around 80Hz-5000Hz. Of course the overtones are important too, but the human hearing range is definitely a limit: humans hear between about 16Hz-20000Hz, but rock musicians often have a hearing damage that brings down the upper limit to about 15-16000Hz (like me…) So with the above average gear a guitarist who plays only his vintage strato will most probably not have any problems with the lowpass cut-off introduced by the gear. Also the hi-gain metalhead, who for whatever reason doesn’t use an active guitar, but mostly plays power chords on a guitar tuned to drop C anyway will also most probably not be worried about the high loss with his setup. Of course everybody is free to spend his money and time on whatever he wants it, but there is one very important thing to consider: one can be a better guitar player only by practicing a lot and not by buying new and high end gear.

So my tip is: start your chain with a buffer and your day will be good ;)

The build docu for the Cornish and Klon buffers can be found under the Projects menu.