The history of guitar effects is full of iconic pedals. One of them is undoubtedly the Pro-Co Rat. Any guitarist who has ever read a bit about distortion pedals has surely met this piece. Famous guitarists like Thurston Moore, Jeff beck, Andy Summers or Kurt Cobain have used this effect. And of course other gazillions whose names I can’t even collect. The effect was designed in 1978 by Scott Burnham and Steve Kiraly, the owners of the that time still small garage company Pro-Co Sounds. The effect followed the opamp based design that became popular around that time. The choice of weapon was the LM308 chip – most probably by chance (and because of its availability), but this choice proved to be a lucky one: this chip is mostly responsible for the Rat’s distinct sound. About the sound: thick, almost fuzzy, rich in mids, rather dark. Don’t expect too much details from it, the pedal is rather suited for punchier, harder sounds than for subtleties. At the same time it has a much wider dynamic range than the typical fuzzes, so it has more details than them. The versatility of the pedal was proven by many players in many songs starting from the eighties hair-metal bands to the nineties grunge and post-punk formations.

There is a detailed analysis of the circuit on the web, so I just want to mention the most important elements here.

One of the most important parts in the Rat – as already mentioned – is the opamp. The LM308 is one of the keys to the sound of the effect. One of the most important attributes is its slew rate. This shows how fast the opamp can follow the changes in the input signal on its output. The lower is the slew rate, the worse the opamp can follow the input signal changes on the output and that means too that higher frequencies (quick changes) can be amplified worse or not at all. The LM308 is already out of production, you can still buy it here and there but quite expensive. The newer Rats use OP07 instead, this is still widely available. I have tried both and have to say that I hear little or close to no difference between the two. I also have tried the common TL071 (you need to omit the 30pF compensation cap with this one), but it sounded thin and weak compared to the LM308 or the OP07, I would not recommend it at all.

The second important part of the Rat is the hard clipping arrangement. The original used two Si diodes (1N914/1N4148), then the Rat2 had two 3mm red LEDs and the Turbo Rat had Ge diodes. You can experiment here to find the arrangement that suits you best. Once I built one with a Si diode and 10mm red LED for a friend, he found that to sound the best after trying many variations.

The third important part is the passive filters all 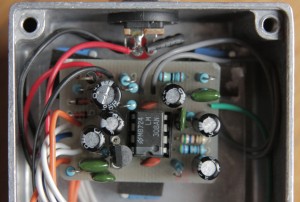 around the circuit. The mentioned analysis describes them quite in detail. From my side I’d like to add that the 3.3nF cap at the last lowpass filter that is controlled by the “Filter” pot to me seems to take too much of the sparkle out of the sound so I prefer to decrease it to 2.2nF. Also the original Rat had the “Filter” pot wired backwards compared to how conventionally the tone potmeters are wired: in the counterclockwise direction you got more and more highs. In my layout it is wired in the conventional way.

At the end of the circuit there is a simple JFET buffer. The layout says 2N5458, but you can try actually any type of JFET here, I would even risk to say any BJT transistors would work without modifications.

You can find the build docu under the Projects menu.