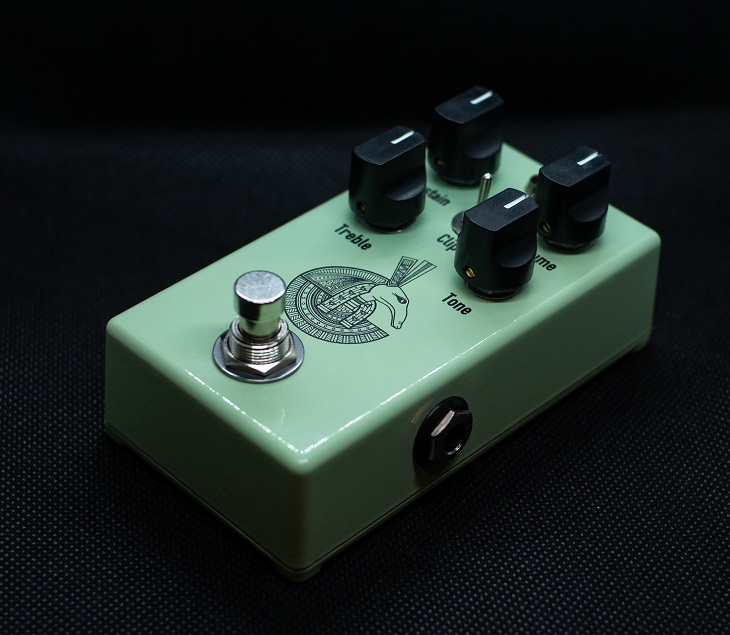 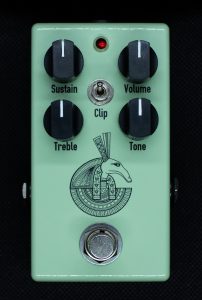 I always liked the Big Muff type pedals (and Freud would most probably analyse this quite thoroughly…) The Little Prick that I showed you earlier is also one of these. For a long time that was my main distortion pedal, but not long ago I have built a clone of Black Arts Tonewroks’ Pharaoh fuzz. The weakest point of the Big Muff circuit in my opinion is the missing mids. I already made some tweaks in the Little Prick to fix this. In the Pharaoh the tone stack was designed so, that it doesn’t filter the mids too much by default. In the counter-clockwise position of the High pot and the middle position of the Tone pot the effect starts to attenuate frequencies above 300Hz and the attenuation reaches its maximum of -7dB at about 700Hz. In the clockwise extreme position of the High pot the mid and high frequencies stay at about 0dB, while with the Tone pot we can attenuate frequencies below 110Hz. It does more or less the same as the Tone Wicker switch that is installed on some Big Muff pedals to bypass the tonestack. In the Pharaoh the tonestack stays there filtering the frequencies above 10kHz which is not a biggie, in standard E tuning the highest fundamental note that can be played on a guitar is at about 1400Hz and guitar speakers rarely can reproduce anything above 5kHz.
In addition in the Pharaoh there are two switches: one to control the input sensitivity and one to change the clipping diode arrangement. For me the former one is not really useful, maybe guitarists with active pickups would appreciate it. The latter one has two positions: one is a symmetrical Si diode arrangement that gives a bit less distortion, but a more open sound. The other is an asymmetrical Ge diode arrangement that yields a bit more distortion, more compression and a bit lower signal level.
What else could I say? It has the typical Big Muff sound with lots of gain, and a nice tonestack with a good range. This is now my new favourite and a new pedal on my board.

There is nothing new in the schematic. It is a standard Big Muff circuit with a little variation with the clipping diodes in the third stage and some changes in the tonestack. Highly recommended for all “muffists” out there, but also for those hat only look for a good distortion device. There are two versions in the documentation: one for the original with the two switches and one simplified where I used fixed values. In this latter one I have set the input sensitivity to the high value (lower resistor value) and the clipping diodes in the second stage are one 1N418 and one of your choice (value is marked as “xxx”). I ended up using the standard symmetrical arrangement with two 1N4148s. The original with the two switches fits only in 125B while the simplified one fits also in 1590B. The documentation can be found under the Projects menu.