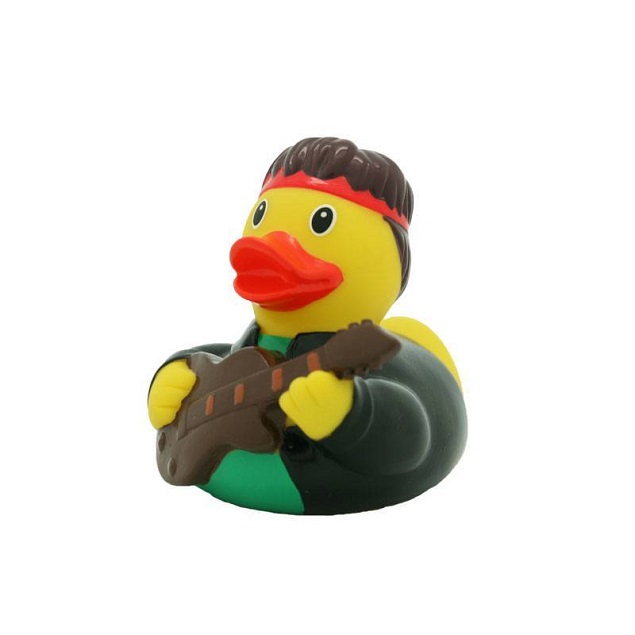 Let’s step out a bit from the good old distortion/OD/fuzz circle. A famous effect type among guitar players is the reverb. But what does it do? Basically the clean signal gets mixed with delayed copies of it, where the delay times are all about the same, but not exactly. This simulates an echoing room. The delay times simulate the size of the room while the decay simulates the material of the walls (ceramic tiles produce more echo than wallpaper or carpets). In practice it means that we need to use several delay circuits (typically about 5) with almost the same delay times. While there are analog delay effects out there (EHX Memory Man being one of them), still it is quite impossible to get five of these into one reasonably sized enclosure. Therefore in pedal size there are only digital solutions. One could use several PT2399 ICs, but luckily that is not necessary, the engineers at Belton have done this for us and have created the BTDR IC. The BTDR1 was quite large. It is still available, but it makes more sense to go for the way smaller BTDR2. Both of these are available in three versions with different decay times: short (2s), medium (2.5s) és long (2.85s). Not so long ago the BTDR3 was introduced, here the decay time is variable with a potmeter.

This entry in my blog is not about a commercial pedal, but about the Rub-a-Dub reverb that is based on the BTDR IC and which is a well known and appreciated DIY project. Quite some PCB manufacturing companies sell PCBs for this project (like the 1776 Effects), but based on the docu in this entry you can build yours from scratch. The sound of this effect is quite good, almost like analog spring reverbs – at least the short version. The medium and long versions have some additional little modulation, almost like having an additional chorus effect engaged too. This is not very disturbing, and can even be an additional plus if you like this sound. It is definitely worth to try all BTDR versions, the base circuit is the same anyhow. 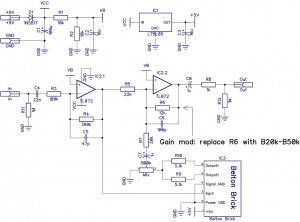 From the circuit it can be seen that besdides the BTDR IC there is only the signal splitting and combining part realized with an opamp. The effect has one Mix pot to control the depth of the effect. In addition I like to replace the R6 resistor with a pot to get a volume (or to be more precise a gain) control. That way the effect can even be used as a booster if necessary. 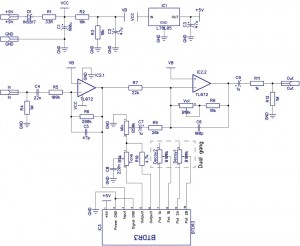 Here additional controls are available: the Tone and Decay pots and also the Vol/Gain control has been implemented as I mentioned at the Rub-a-Dub already.

With some skills it is possible to put all this stuff into a 1590A box (the build docu contains the PCB artworks for this), but then submini elco caps, 9mm pots and low profile jack connectors are a must.

The build docu (Rub-a-Dub and Rub-a-Dub Deluxe) can be downloaded in the Projects menu.

The Rub-a-Dub PCB artwork is inspired by and based on Jon Patton‘s layout.