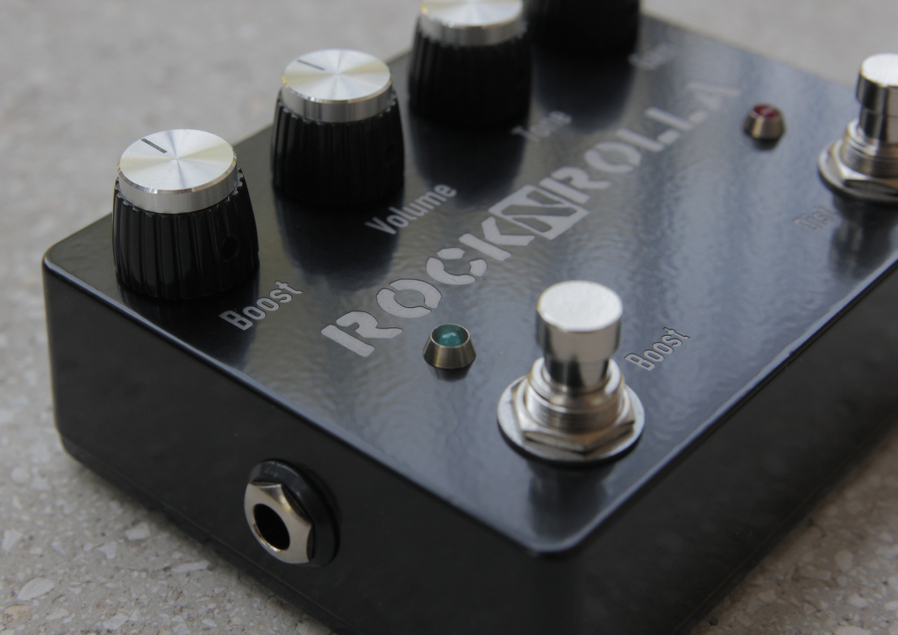 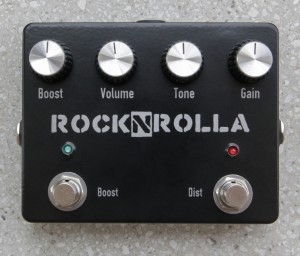 I always liked the two-channel boost + OD solutions. If the basic sound is good then these are more versatile, if you are lucky one pedal can cover all your OD/dist/fuzz needs and save you considerable space on your board. Today’s pedal is such a dual one. At the very beginning of my pedal building “career” I have built an Earthquaker Devices Crimson Drive clone. I used it for a long time as my main OD pedal and had the impression already back then that this design has more potential in it. Once I boosted it with a clean booster (I don’t remember what exactly it was) and I was amazed about the amount of gain that I could achieve that way. Everything was in there from mild distortion to some lower gain fuzz sounds. Then I put the effect away for a few years and built and used other designs. Until very recently when I wanted to build a Zvex Box of Rock. I was very convinced by its sound based on the demos and had the enclosure prepared before I built the effect. And then when I finished the electronics too I was very disappointed, so much that I didn’t want to build that pedal anymore. But I still had an already prepared enclosure, already powder coated, drilled and labelled… Luckily the labels I used were pretty generic ones, so I just had to find a boost + OD solution that I could use in the same box. I tested a few of my already built effects and the EQD Crimson Drive was pretty high on the list. After trying with several boosters I found to work it best with another EQD design: the Speaker Cranker. I don’t know how this effect should be called… It is not a clean booster because it breaks up at higher levels. I think best name would be the “dirty booster”. It was clear to me already when I first built it that it is not really a useful effect in itself, but rather in front of another OD or distortion pedal to give that one a boost. That’s how finally the Rock’n’Rolla was born. The booster and the OD part are independently switchable. The sound is dominated by the Ge transistor and diodes in the Crimson Drive: it is always a bit fuzzy with a considerable amount of treble content (not to wonder: the design is based on the Dallas Rangemaster treble booster). Turning the Gain all the way up we get to distortion territory and engaging the boost too we can go to fuzz as well. Here is a little demo:

And now the schematics as usual: 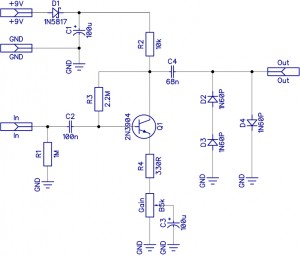 Boost:
As we can see it is a simple common emitter type design. The gain is controlled by the 5k potmeter. The D2-D3-D4 clipping diodes make the sound dirty. The original has three 1N60P Schottky diodes here in an asymmetric configuration, but one can play with these to tailor the dirt added to the sound.

OD:
This design is based on the Dallas Rangemaster, an old Ge transistor based treble boster. Tommy Iommi used to use one among many other players to overdrive his amp. In this one a buffer has been added to the front and clipping diodes after the booster section. The clipping diodes are in an asymmetric Ge and Si configuration. For the FET in the buffer part almost any JFET can be tried. If you don’t have J201, you can try J202, J113, 2N5457, 2N5458 or anything else actually. The Ge transistor can also be any PNP type transistor with hFE about 100-120 or above. I have tried AC125, AC128 and GC509 with success. The higher the hFE is the more gain you will get – of course the leakage should be kept as low as possible.

You can find the build docus (Crank It! and Drive It!) under the Projects menu.