I pondered a lot what should be the first pedal to write about. Obviously it had to be some kind of overdrive or distortion :) Of course I didn’t want to choose something too well known. Also I wanted to write about something that is versatile and is a good sounding unit. And so my choice was the Hermida Zendrive. This not the rarest pedal of the world, but doesn’t belong to the mainstream either and the sounds it can produce set the bar quite high – at least according to my ears. It is transparent, but not fully, it still has personality. With the different combinations of the Voice, Tone and Gain controls one can achieve a wide palette of sounds starting from almost clean to crunchy blues. Pushing an already overdriving/distorting amp channel it is even possible to achieve smoky rock sounds or even some vintage metal tunes. Here is a little demo with a copy built by me and played by the guitarist of the band Steroid: 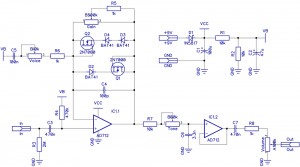 Not only does it sound good, but also the inside has some unusal stuff to offer for those who are interested in the electronic details. The basics are simple: an opamp with negative feedback. But in the feedback loop the soft clipping is provided by MOSFET transistors, which is already quite unusal. The original type is 2N7000, but the other common type BS170 can be used as well, just watch out for the pinout that is mirrored compared to the 2N7000.

The Voice control is also interesting. The frequency response (and the gain) of the feedback loop usually is set by a fixed resistor and capacitor. Here the resistor is a potmeter, so you can change the voicing of the pedal in a wider range, not just with the plain lowpass filter formed by R7 + Tone pot + C6.

The opamp in the original is a higher end (and also more expensive) type AD712, but you can actually use any type of dual opamps. I built mine (and actually several ones for friends too) with JRC4558 just because that is way cheaper and I didn’t hear big differences between the different types. In general I don’t hear huge differences between the opamp types in the opamp based distortions/overdrives I have built, but I’m quite sure that many people will not agree with this statement :) Of course it makes sense to socket the opamp then you can try different types and of course you won’t fry your chip when soldering. From the schematic one can see that the other half of the opamp is merely used as a buffer. I didn’t try it or made a layout for that, but theoretically you could simply ommit it and make a layout with a simple opamp (TL071, LM741, etc.) One could also use the second half of the dual opamp for a second amplification stage to achieve more gain or use it for an active gyrator type of tone control (á la Tube Screamer) instead of the already mentioned passive lowpass solution. So the schematic has also quite some potential for modding, but the engineers at Hermida made a very useful pedal.

You can find my layout and build docu under the Projects menu. It can be built in the standard 1590B or even in the smaller 1590A size too, of course the latter is impossible with battery.