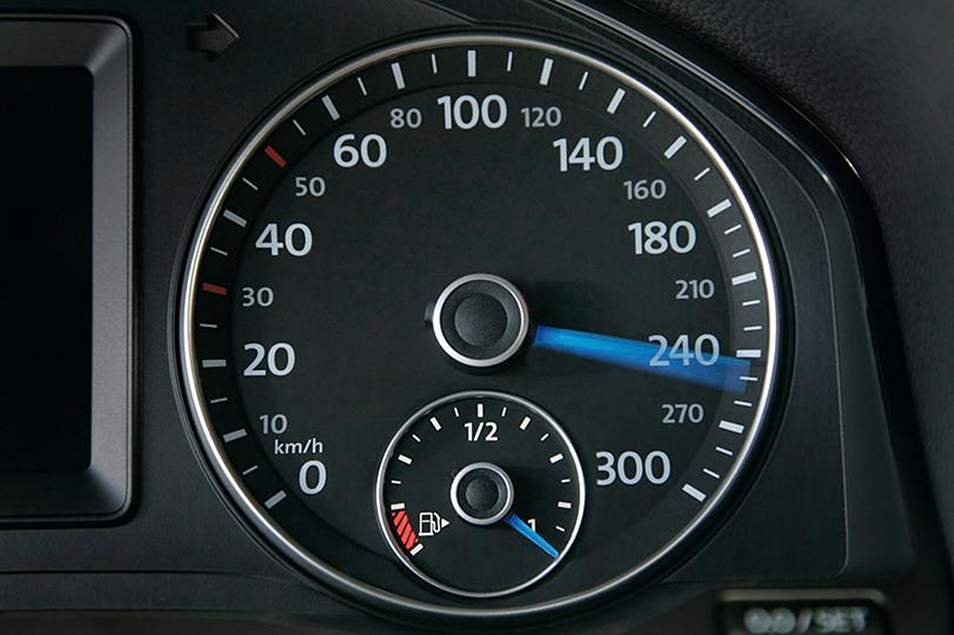 The DOD 250 Overdrive Preamp would most probably have a nice place in the Top 10 Historical Pedals list. It is one of the oldest and most basic designs that has been copied, modified and improved to other effects over the years. Almost all guitar players tries it once in his life, the most famous user is Yngwie Malmsteen. Turning the drive down and the volume up it is a very nice boost pedal, but it is also a good standalone overdrive. The sound is a bit too bright for my taste, but is sits in the mix really well. Not the most versatile pedal in the world, but it does really well what it does. 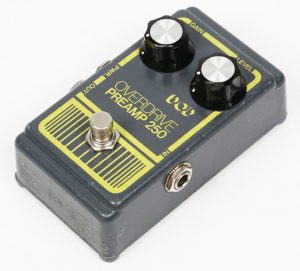 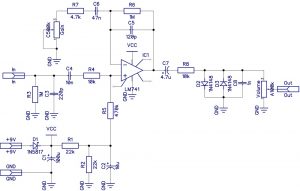 The original grey pedal uses a single opamp, the good ole’ LM741. The design is a very simple non-inverting amplifier. The gain is defined by the R6/(R7+Gain) formula. You can see that lowering the value of the Gain pot we get higher gains. At the same time changing the value of the Gain pot also changes the frequency response, because C6, R7 and Gain define the frequencies being dumped to ground. At 0Ohm for the Gain pot the frequencies below 720Hz are gradually less amplified and dumped to ground, while at 500kOhm the cut-off frequency is at 6Hz, so actually the whole audible range is being fully amplified (even though the amp rate is much lower). Therefore the pedal gets more bright and nasal when increasing the distortion level.

The amplified signal gets to a back-to-back pair of clipping diodes that cuts the top of the signal. The higher level signal gets through these diodes the more the clipped signal will get closer to the square wave shape, therefore the distortion is increased. C8 at the end does some high filtering and finally the signal gets to the output through the Level pot.

Not rocket science, actually it is a very good example to understand the basics of all opamp based distortion designs. 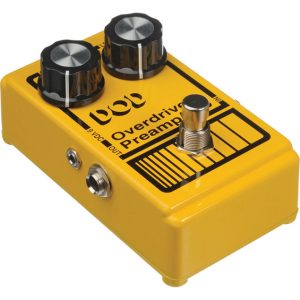 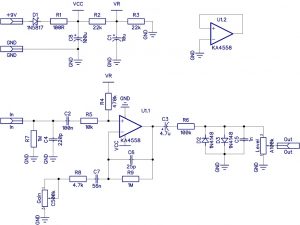 The newer yellow/gold Reissue model uses a bit more modern dual opamp’s one half: the well known 4558. Further differences are:
– The input decoupling cap has a higher value (100nF instead of 10nF), therefore more bass content can get to the opamp stage.
– The filter going to the ground in the feedback loop has a 56nF cap instead of 47nF. With this the cut-off frequency at maximum gain gets to 605Hz which again leaves a bit more of the lower content in the signal.
– The resistor before the clipping diodes is 100kOhm instead of 10kOhm. This lowers the clipping a bit and also the compression.

I liked the Reissue model more than the original grey one, and have also used it as my basic OD for a while. 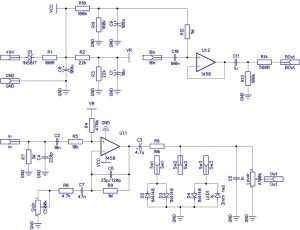 The unused opamp half in the Reissue model disturbed my OCD quite a bit. I was already thinking about any possible options to use it as a second amplification stage or as an active tone stack when I got a request to build a DOD 250 clone with a switchable buffer. I immediately thought about this unused half of the opamp and this is how the drdFX250+ was born. Not a big deal: just used the other half of the opamp for a Klon-style buffer, which has its own input and output and can be switched separately. The customer wanted the specs of the grey version, so I used those and a 1458 IC which essentially is two 741’s in one DIP8 package. The request was also to decrease the compression so I added a 3-postioin ON/OFF/ON switch to the clipping section that switched between three configurations: 2xSi, Si+LED and no clipping. In the latter case the pedal functions more like a clean booster, distortion is only present at very high Gain settings that comes from the internal overdrive of the opamp itself.

All three designs of the pedal have plenty of options for mods:

2) Play with the filter going from the feedback loop to ground. With changing those R and C components the frequency response can be changed.

3) With increasing the input decoupling cap the bass content can be slightly increased.

4) Like with every pedal that uses diode clipping I highly recommend to experiment with different clipping diode configurations.

5) The cap in parallel with the clipping section to ground acts as a low pass filter. Increasing it you can filter out some more highs from the signal.

From the above list it is clear that the DOD 250 is a very good example for opamp based distortion effects and a good base for mods or even own designs.

The build docu for all three versions can be downloaded in the Projects menu.