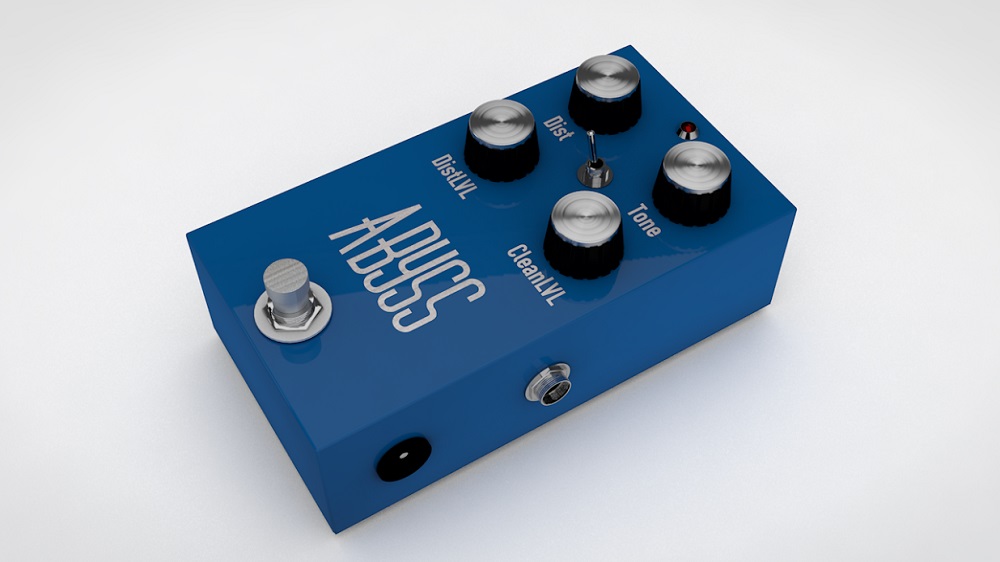 I’ve been looking for a good while for a higher gain distortion for bass guitar. I tried many pedals, some of them had a pretty good sound too, but all of them suffered from the symptom, that the lows got thin and attenuated when the gain was turned up. The maxon SD9 Sonic Distortion was one of the best candidates because that effect has very emphasized lows, but even this pedal had the same problem. On the other hand already when I first saw the schematic of the Sonic Distortion I started thinking what I could do with the second half of the dual opamp that the Maxon engineers only used for stabilizing the reference voltage. While searching for the right bass distortion I thought why not using it as a clean booster and mix back the boosted clean bass sound to the distorted sound to retain the lows? This is how The Abyss was born. The Tone, Distortion and Dist LVL pots control respectively the tone, the amount of distortion and the overall level of the distortion side of the effect, while the Clean LVL pot controls the boosted clean bass that is mixed to the output. Also I have added a switch to change between a fuzzier and a punchier sound. The distortion and the clean booster sides are independent, so you can use either one alone too. The proportions of the distorted and clean sound can be set by the two level pots. Of course the effect can be used with a guitar too.

Already at the original I liked an asymmetrical clipping diode arrangement more, so I designed The Abyss already with this thought in mind. The punchier sound is achieved with one Si diode and one LED, while one Si and one Schottky diode provide the fuzzier sound.

The original SD9 had the good old JRC4558, I have put that in The Abyss too, but of course it is worth to socket the opamp and try different types.