Return Of The Hedgehog 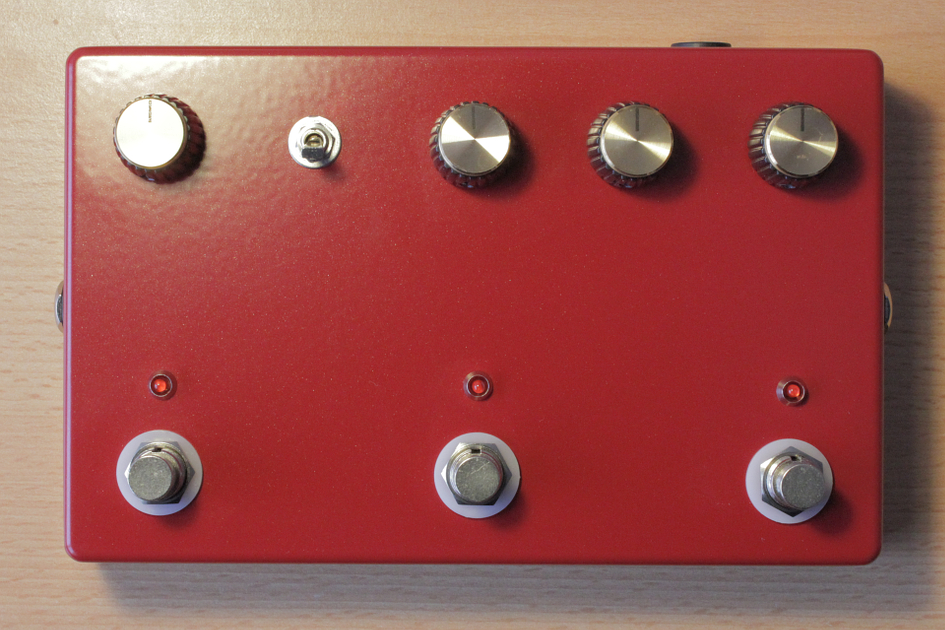 Return Of The Hedgehog

In an earlier entry I have already written about the Maxon SD9 Sonic Distortion. The guys at Maxon have created its updated version: the SD9M. The pedal became more versatile: it has now a “Gain” and a “Mids” switch. The “Mids” switch makes it possible to get more mids out of the pedal, not just the scooped sound that the original had. With this setting the effect becomes stronger, more emphasized and a bit rounder. I would actually always use this setting. The “Gain” switch provides a more distorted sound. This would even be more versatile in conjunction with an additonal “Gain” or “Boost” pot – the vefsion that I have built (see my modification recommendations at the end). The sound ranges from crunchy rock tones all the way up to some classic metal sounds. You won’t use it for some Cannibal Corpse songs, but you can definitely use this from Black Sabbath all the way to some Metallica sounds.

You can see on the schematic that there are several modifications to the original SD9. For one there is an additional opamp gain section right before the hardclipping diodes. With the “Gain” switch off this section has a gain of about 1, so behaves more like a buffer and has no real effect on the sound. However when you flip the “Gain” switch the gain of this section jumps to about 10, thus pushing the hard clipping diodes harder which results in more distortion.

With the “Mids” switch you can change the lowpass portion of the Big Muff type tone stack. With the switch in the closed state we get the same values as in the SD9: R=6.8kOhm and C=100nF (R16 and the sum of C14 and C15 being in paralel). The cut-off frequency of this configuration is 234Hz. With the swich in the open state we take out C15 from the equation and the lowpass filter now consists only of R=6.8kOhm and C=33nF, the cut-off frequency is at 709Hz. This configuration lets through much more of the mids range. The difference of the frequency transmission is visible on the two pictures created with the Duncan Amps Tone Stack Calculator app. The three curves show the minimum, maximum and middle positions of the “Tone” pot. 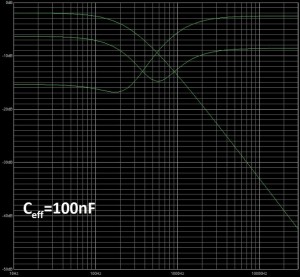 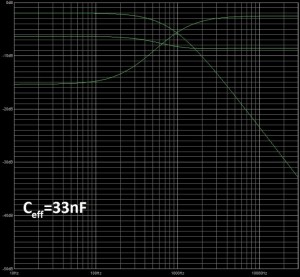 Last but not least the effect got an output buffer. If you want to make the effect more simple you can omit this output buffer together with the buffer of the reference voltage. With this you can spare one opamp chip. Since the effect doesn’t become much more cheaper with this I have not omitted them.

Modification recommendations:
– The simple “Gain” switch and R11 (43k) can be replaced with a DPDT switch that alternates between a 50k resistor and a B50k potmeter. With this you can have an additional “Gain” or “Boost” potmeter and the switch can even be a footswitc making the pedal a more versatile double pedal.
– I would omit the “Mids” switch and the C15 and R18 parts. The effect sounds so much better with the more mids configuration, that I would even go as far as suggesting to replace the 100nF cap in the original SD9 as well int he same position to a 33nF one.
– Like in all distortion effects that operate with clipping diodes I would suggest here too to experiment with different diode arrangements or even make them switchable. 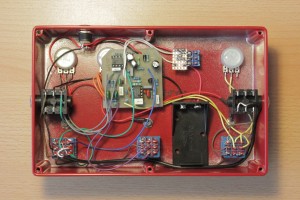 In my build on the picture I have implemented the additional footswitchable gain pot, a 3-position switch that changes one of the clipping diodes between different types (LED, Si, Ge) and made the “Mids” switch footswitchable as well.

The build docu can be downloaded under the Projects menu.